1916 – 2016: Proclaiming the American Story, is currently on view at The Consulate General of Ireland, New York. Portraits of contemporary Irish-American historians with a selection of historic images and text create an American perspective of Ireland’s struggle for Independence.

Click here to learn more about this exhibition and related publications

Archbishop John J. Hughes and The Building of St. Patrick’s Cathedral featuring a selection of paintings from the Brian P. Burns Collection of Irish Art. The extraordinary story of a towering 19th century Irish immigrant and the Famine Irish who built a New York landmark.

Ireland’s Great Hunger Museum, Músaem an Ghorta Mhóir, is the world’s largest collection of art and sculpture relating to the catastrophe that devastated Ireland from 1845–52. There are only a handful of public institutions in Ireland that tell the story of Ireland’s Great Hunger. With the opening of this museum, there is now one in North America, home to so many generations of descendants of Famine immigrants.

The mission of the museum is to educate people of all ages, using world-class art, about that traumatic period of 19th-century Irish life. It is the vision of Quinnipiac University, and its president, John L. Lahey, that the museum will become a center of artistic and academic excellence—collecting great works of art, conducting tours and hosting discussions, films, plays, and concerts to showcase the richness of Irish culture and ideas. 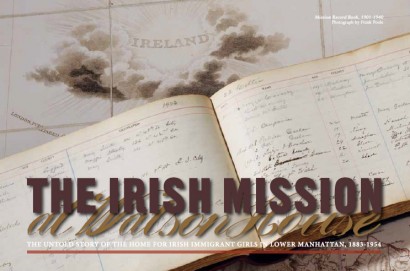 Facing the harbor and Staten Island, and across from Battery Park, Watson House is one of the very few colonial buildings still standing in the City of New York. The front columns built from ship masts were expressive of the successive sea merchant owners, starting with import/exporter and civic leader, James Watson. The United States government used the building during the Civil War and after the war the Harbor’s Pilot Commissioners made their headquarters there. On December 4, 1885 the house was sold to Rev. John J. Riordan who established the Home of the Mission of Our Lady of the Rosary for the Protection of Irish Immigrant Girls on the site.

The post-famine (1845-52) Irish custom of giving the land to one inheriting son and dowering one daughter meant that many non-inheriting sons and daughters emigrated. Irish emigration was unique in that it was an emigration of siblings with women frequently outnumbering the men. A second agricultural depression that began in 1879 further stimulated emigration and created conditions that led to the creation of a mission to serve young women who emigrated alone. Mission agents met Irish immigrant women when they landed, assisted them with meeting relatives and friends and brought those who needed further assistance or accommodation to the Mission. 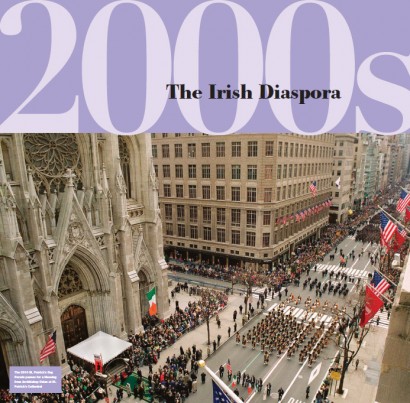 Through a series of eight wall panels, Curator Turlough McConnell interprets each decade of the last eighty years in Irish and American history, culture, and photographs. Each Irish Consul General and Grand Marshall of the St. Patrick’s Day Parade is listed, along with New York’s mayors and governors, American and Irish Presidents and each Irish Taoiseach, with their years of service. 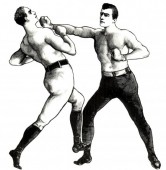 Organized by the Irish Arts Center and curated by collector James J. Houlihan, The exhibit first opened in 2006 at the Irish Arts Center, moved to the South Street Seaport Museum in lower Manhattan (2007), the Burns Library at Boston College (2008), the Ulster American Folk Park in Omagh, Ireland (2009), Croke Park at the GAA Museum in Dublin, Ireland (2010), University of Limerick (2011), and the Irish Center in Pheonix, AZ (2013). 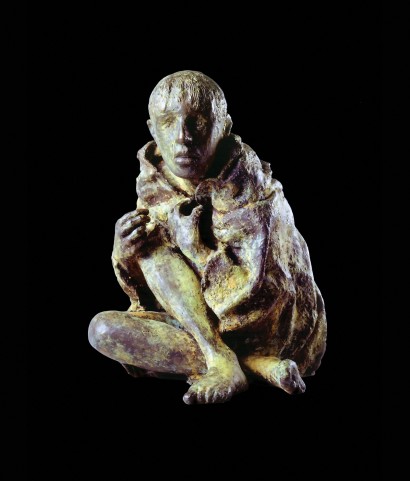 The Great Hunger ranks among the worst tragedies in the sweep of human history. Between 1845 and 1850, approximately 1.5 million Irish men, women and children died of starvation or related diseases. By 1855, more than two million more fled Ireland to avoid a similar fate. In a single decade, Ireland’s population dropped by half, from eight to four million, and continued to decline for the rest of the century. By 1900, only two million people remained in Ireland. Indisputably the worst chapter in Ireland’s history, The Great Hunger occurred during an era of sufficiency: There was more than adequate food in the country to feed its starving populace. Exports of food and livestock from Ireland actually increased during those years.

The exhibition contains sculptures by such artists as John Behan, Glenna Goodacre, Rowan Gillespie, John Coll, Eamonn O’Doherty and Kieran Tuohy. Several pieces in the collection are maquettes, or miniatures, of Famine memorials that have been erected in recent years both at Irish ports where families embarked for new lands and at ports of entry in the United States and Canada where the Irish fled in desperation. Paintings, lithographs, photographs and etchings by artists including Padraic Reaney, Micheal Farrell and Kit DeFever are also featured. 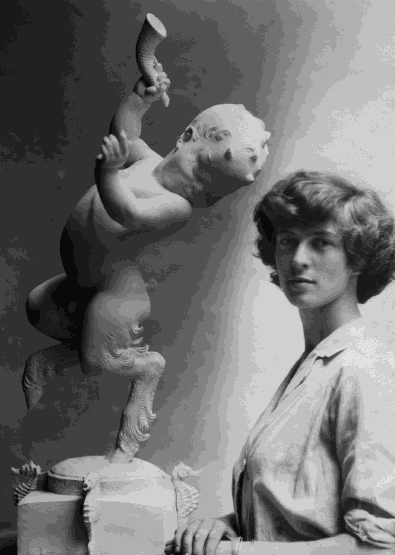 Sculptured Lives presents sculptured heads and figures, drawings, paintings, photographs and letters spanning over 50 years of Helen Hooker’s artistic career. The selections were drawn from the many works created by the artist since 1911. On view are books, letters, photographs and ephemera that tell the story of Helen and her Irish husband, IRA Commandant- General Ernie O’Malley, the soldier and writer. Also included are some of his books and rare letters to him from Eamon deValera and his artist friend, Jack B. Yeats. Family photographs feature his friends film director John Ford, and actress Maureen O’Hara.

A highlight of the exhibition is a rare film interview with Helen Hooker in 1973 and a recent documentary of Ernie O’Malley that premiered in 2008 on TnaG, Irish Television.

Click here to see a PDF of the exhibition’s catalog 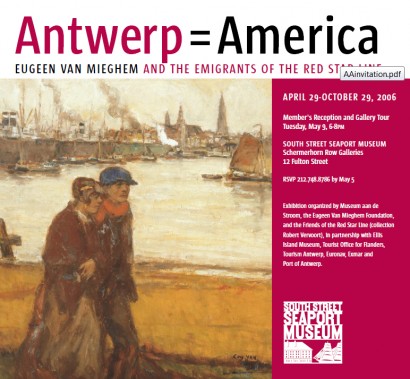 Between 1873 and 1934 three million emigrants left Europe for America, traveling with the Red Star Line from the port of Antwerp in Belgium. They were comprised of Belgians, Germans and Eastern Europeans, mostly Russian and Austro-Hungarian Jews.

The exhibition recounts the Antwerp part of the shipping line’s history between 1870 and 1930, a period of great economic prosperity. It features images of the Antwerp streets and quays, which the emigrants passed on their way from Central Station to Rijnkaai (Rhine Quay), where the Red Star Line ships set sail for the US. The highlight of this exhibition is the panoramic Hypsos Map, which dates back to 1913, and which depicts the city and its port in great detail. The map comes with an interactive program, which enables visitors to call up any information about Antwerp in 1913 and which also enables them to walk in the footsteps of the emigrants in Antwerp on screen. In addition the exhibition also displays ships’ models, posters, menus, furniture and old film fragments related to the Red Star Line.

Throughout the exhibition works by Belgian painter Eugeen Van Mieghem (1875-1930) are showcased. His parents owned a pub near the Red Star Line warehouses, and he became a witness and painter of the immigrants who left via Antwerp for the New World. His drawings and paintings evoke life in the port and the history of the immigrants. The South Street Seaport Museum is located in the historic port neighborhood of Lower Manhattan, near the Hudson River berths of the great immigrant steamships. 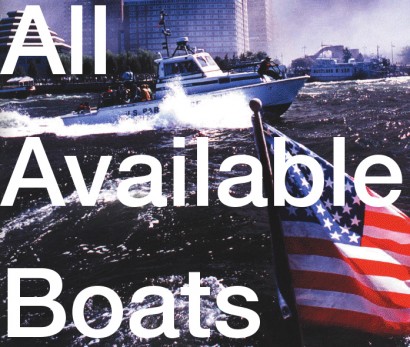 In the days immediately following 9/11, the staff of South Street Seaport Museum came together to create an exhibition of “America’s Dunkirk,” the evacuation of more than 500,000 people from Lower Manhattan after the terrorist attacks. Ferries, yachts, and working vessels responded to the Coast Guard’s call for “All Available Boats.” Using previously unpublished personal photographs and recorded interviews with both rescuers and rescued, the exhibition was organized with support from the National Endowment for the Humanities and its world tour was underwritten by Pfizer.