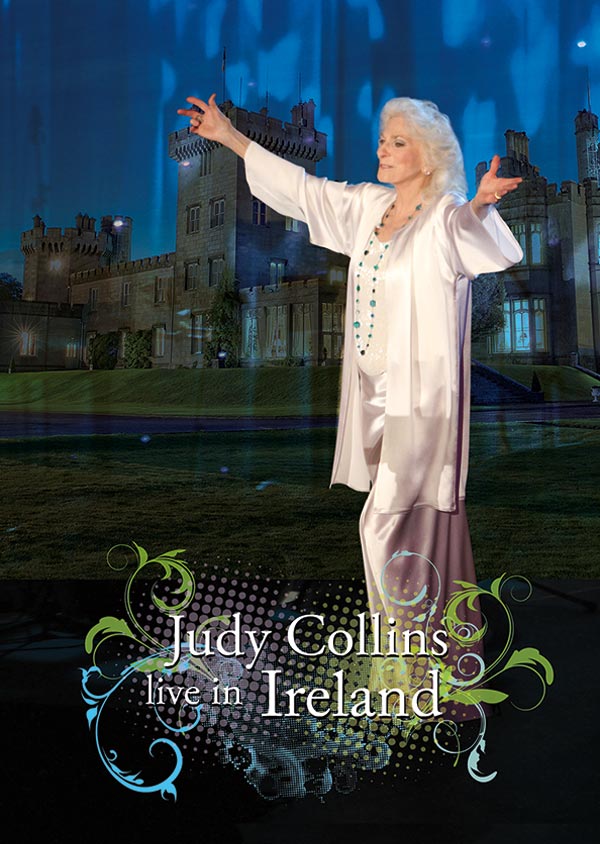 Join Judy Collins for a night of her favorite Celtic folk songs, stories, and hits that created the backbone of American folk music: Judy Collins Live from Ireland is a PBS Pledge Special Presentation showcasing the internationally renowned singer-songwriter’s special focus on the impact of the Famine on music in Ireland and in the United States. Filming took place on September 29, 2013 at historic and picturesque. Dromoland Castle, Co. Clare, Ireland (http://www.dromoland.ie/).

The show features the Irish tunes, Wild Mountain Thyme, She Moved Through the Fair (featuring “the amazing” Mary Black!), and of course, Danny Boy.

Live from Ireland marks the return of this star performer to PBS television. Her previous special, Judy Collins Live at the Metropolitan Museum of Art, was nominated for a New York Emmy and won a Bronze Medal at the 2013 New York Festival International Television & Film Awards.

Known for an incomparable string of worldwide hits such as Amazing Grace and Send in the Clowns, Judy Collins is a firm favorite in Ireland and at PBS and its nationwide affiliate stations.

In a fifty year career, Judy Collins has thrilled audiences worldwide with her unique blend of interpretative folksongs and contemporary themes, including the work of fellow artists such as Bob Dylan, and bringing Leonard Cohen and Randy Newman to a wider audience. Her version of Stephen Sondheim’s classic Send in the Clowns won a Grammy; her version of Joni Mitchell’s Both Sides Now is in the Grammy Hall of Fame.

Quinnipiac University is Top Underwriter of Judy Collins in Concert – Live from Ireland in association with Ireland’s Great Hunger Museum and Ireland’s Great Hunger Institute at Quinnipiac University. Judy Collins visited the Hamden campus in February 2014 where she met with Dr. John L. Lahey, QU President, Museum Director, Grace Brady, and IGHI Founding Director, Christine Kinealy, who presented her with a copy of Kinealy’s latest book, Charity and the Great Hunger in Ireland: The Kindness of Strangers (Bloomsbury, 2013).

Turlough McConnell Communications is a co-producer of the television program.

This entry was posted in news. Bookmark the permalink. ← Joker at the Universe A Bicentennial Celebration | Adrian Flannelly Show →