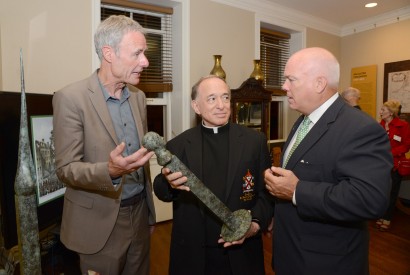 “Irish history often has to be salvaged from the dismal forces that have conspired to obscure it – deep cultural or religious hostility, lack of sufficient funds, political upheavals, even the passing of time itself.

To paraphrase James Baldwin, when you have to struggle every day to snatch your dignity from the forces that range to deny it, actually telling your story can be the most revolutionary thing of all.

No one knew this better than Archbishop John J. Hughes. Born in 1797 and raised in Co. Tyrone, thanks to the penal laws of his era he suffered persecution for being both Irish and Catholic in Ulster…”

This entry was posted in news. Bookmark the permalink. ← A Bicentennial Celebration | Adrian Flannelly Show A Monumental Legacy: Archbishop John J. Hughes and the Building of St. Patrick’s Cathedral →