Crossing oceans and spanning decades, DruidMurphy covers the period from The Great Hunger of the 19th century to the ‘new’ Ireland of the 70s through three of the greatest plays of Tom Murphy: Conversations on a Homecoming, A Whistle in the Dark and Famine. DruidMurphy is a major celebration of one of Ireland’s most respected living dramatists and is presented in a co-production with Quinnipiac University, NUI Galway, Lincoln Center Festival and Galway Arts Festival.

Multi-award winning and internationally known, Druid was co-founded in Galway in 1975, the first professional theatre company in Ireland to be based outside Dublin by Garry Hynes, the first woman to be honored with a Tony Award for direction. The company tours Ireland and key global centers, reinvigorating perceptions of classic Irish plays and engaging with new dramatic works of a challenging, innovative and daring kind.

The Inaugural U.S.-Ireland Forum was held in New York on November 7 and 8, 2007. Irish America Magazine, together with the American Ireland Fund, University College Dublin, and the Irish Government co-hosted the event at the Affinia Manhattan Hotel.

Over the two days some of the finest Irish and Irish-American minds came together to discuss the changing relationship between the two countries. Themes explored included: Social Capital and Philanthropy, Culture and Education, The Future of the Celtic Tiger, Philanthropy in Ireland, and Ireland—U.S.: The Next Generation.

Inaugural Tour of the Jeanie Johnston

The Jeanie Johnston, a replica of a 408-ton wooden sailing vessel in which over 2,500

Irish people crossed the Atlantic between 1848 and 1855, without the loss of a single life, left Fenit Harbor, Tralee, Ireland in February 2003. After a grueling 60-day transatlantic passage, she called in at port cities along the Eastern Seaboard, including Palm Beach, Savannah, and New York City, before returning to Ireland. She is permanently moored in Dublin, where she is open for public tours. 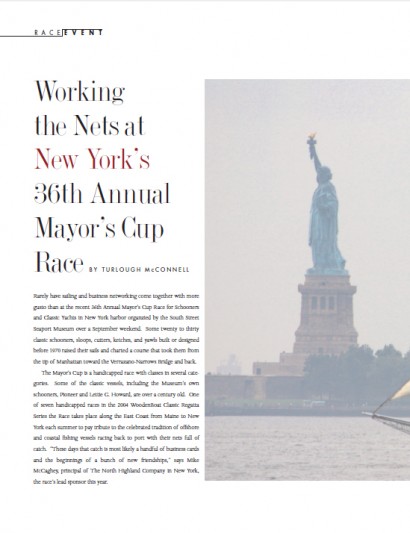 As New York City’s only maritime museum, South Street Seaport Museum takes a prominent place in the city’s celebrations of its sailing and working-waterfront past and present.