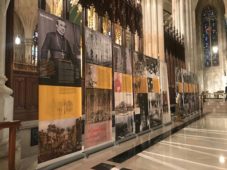 To mark the 160th anniversary of the opening of Saint Patrick’s Cathedral we created and produced a history timeline that is now on display in the cathedral.

Turlough McConnell is a writer and producer who specializes in subjects of historical significance, including art and culture, immigration, Famine effects, and 19th-century New York City. For over three decades, he has contributed numerous Special Features articles and spreads to Irish America Magazine and the Irish Voice newspaper. The creator of many museum exhibitions across the U.S., Turlough also serves as Special Advisor to Ireland’s Great Hunger Museum and Institute at Quinnipiac University.

This year, his historical exhibition, Champions of the Cathedral, opened at Saint Patrick’s Cathedral in New York where it is currently on display. He produced the exhibition The Irish Mission at Watson House: The Untold History of the Home for Irish Immigrant Girls in Lower Manhattan, 1883-1954.  That exhibition just opened at the Archives of the Archdiocese of New York, Yonkers. This month, in conjunction with the National Famine Museum at Strokestown Ireland he will launch the US and Canadian tour of The Great Famine Voices Roadshow at the Embassy of Ireland in Washington, DC.

Earlier this year his play Bishop Maginn: Good Shepherd in a Time of Hunger was read at the Consulate of Ireland New York and also at Culturlann in Derry, Northern Ireland.

In 2018, a reading of his dramatic work, Dear Mr. Beckett, written in collaboration with publisher Glenn Young, was featured at the Consulate of Ireland New York as part of the Origin Theatre’s 1st Irish NYC Festival. His production, Ulster at Play, an overview of theater in Ulster during the last century, was presented at the American Irish Historical Society.

In 2017, a staged reading of Turlough’s play, The Wars of Dagger John, was performed at the Sheen Center Theater, as was his stage show, How The Nuns of New York Tamed the Gangs of New York.

Recently Turlough was commissioned by Origin Theater to write The Land of Promise: A Celebration of the Scots-Irish. The multi-media theatrical presentation opened at the Sheen Center, Manhattan in partnership with Carnegie Hall’s festival,  Migrations The Making of America – A City Wide Festival.

Turlough received the 2017 Ambassador of Ireland Award, which recognizes an individual who has made an exceptional difference to furthering the relationship between the people of Ireland and the United States. Given each year by a representative of the Government of Ireland, Turlough was honored at the Saint Patrick’s Parade of Holyoke, Massachusetts.

This entry was posted in featuredhomeleft. Bookmark the permalink. ← World Ocean Forum Inaugural US Ireland Forum →